Just added to your cart

Link to Dropbox folder for the STL files

Here is the scenario.

You are a tabletop gamer,

you purchased a new resin that is expensive enough that you feel like you bought liquid gold.

Needless to say you want to waste as little of that precious liquid material as you possibly can.

What do you do? You whip out a trusty card style support test.

You print several iterations at different exposure settings, examine them with microscope to figure out which one printed the best details.

You arrive at the ideal layer exposure time, Or is it?

You load up your printer and end up with prints that look like this:

The dreaded partial flat print fail. This type of fail is where the supports either fail to connect to the main print, or the connection diameter of the supports is too small to hold the weight of the print or the individual section. More often it's the latter in most fails. In a wide array of tested resins, getting a "perfect" exposure with the popular card style support tests results in "light" supports on a lot of presupported figures failing.

Mostly, this is due to the fact that there are no features on the support tests that test how much weight or strain a resin can handle before failing--which is more realistic scenario on any supported print. So to address my own pain point of not wanting to waste any more resin on fails from inaccurate calibration tests, I started experimenting and testing to see if there was a better way I could accurately determine the perfect support settings for a given exposure time. Six months of work later and I arrived at the following test model. 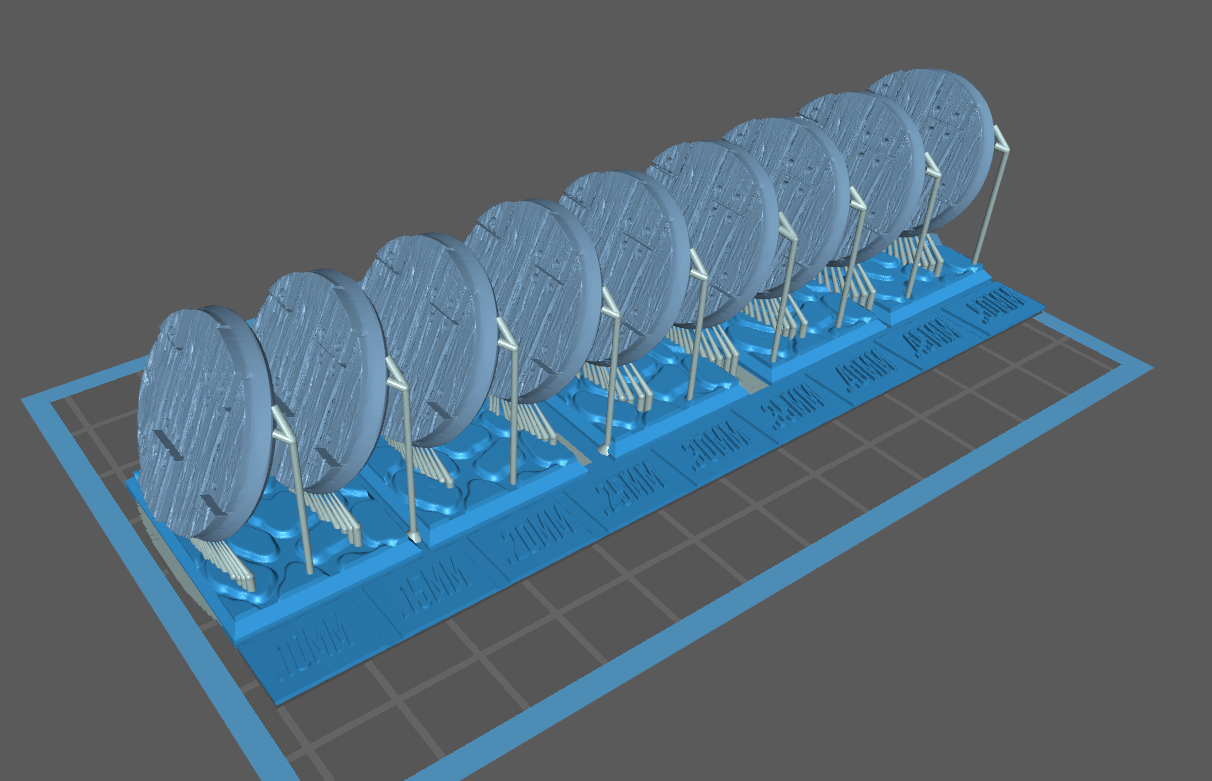 The MOR Support Test, a simple and easy to interpret support test that could be used to match up the ideal contact diameters for your supports with a given exposure time, and for tabletop gamers the majority of the the support test can be turned into textured round and rectangular bases for figures which virtually eliminates the waste problem that all calibration tests have.

The goal of this support test allowing users to find the narrowest possible support contact diameters so that prints will peel off real world prints with minimal support scaring and marks while not failing or detaching mid print and causing a support failure.

The mechanics of the support test are relatively simple, it is a series of 9 round textured 25mm bases that are supported with 21 individual support sprues with a distance of 1-2mm between them.

Each base has the supports set at a different contact diameter ranging from .1mm to .5mm with .05mm increments between each of the 9 bases. Each increment is clearly noted on the model. At the upper end of each of the rounded bases, heavier 1mm thick supports are used to "catch" any of the prints that had failed supports so that they don't stick to your FEP sheet and save you the inconvenience of having to run clean mode or empty the vat to scrape out the failed parts. Here is a walkthrough of how you ideally would use this test.

1. You bought a new tough resin that you have never printed with before.
2. You either get the recommended layer times from the manufacturer or you get a estimated layer exposure time from running a few calibration prints.
3. You run the MOR Support test with the layer time settings you got from step 2.
4. You review the finished print and the lowest diameter that has a intact print that is still attached to the supports is the minimum support diameter that those layer exposure times will be able to hold for a 2g print (the support settings might be able to handle higher weights).

Here are a few real world scenarios that were printed with the Creality LD-002H using Ministry of Resin Durable Grey Waterwashable Resin. The initial calibration strips we did with the XP-2 validation matrix indicated that the idea cure time was around 2.2 seconds.

But when we ran the support test at 2.2 seconds we had failures on .10mm, .15mm, and .20mm bases, which meant that a contact diameter of .25mm would be the smallest that could hold the print without failing mid print.

However, we found that to be thicker than the supports typically seen on many presupported figure models so we decided to massively up the exposure time to 3.1 seconds. You could definitely see signs of overcure on the model, but only the .1mm base failed while the rest held strong albeit overcured.

We finally settled on 2.6 second layer times which provided great surface details while ensuring that prints with fine supports of ~.20mm would hold up. And .20mm is the contact diameter of the presupported models we tested.

The best part of this model is that in the end, both the circular bases and even the printed raft breaks down in 14 different textured bases that you can use for building out table top miniatures that you print and dramatically reducing the amount of printed waste you have to discard.

This project was spearheaded and designed by our Advisor and Business Development Lead Yasu Tano, we wanted to make this test freely available to anyone in the community on a open dropbox folder that anyone could gain access to and hopefully waste less resin on support fails and single use calibration prints.

Modeling credits are always appreciated, feel free to tag any of the following:

Link to Dropbox folder for the STL files

We are planning to create a few more similar support tests to test supports diameters for heavier objects such as 10 and 25 gram weights while producing objects that can be repurposed rather than discarded once interpreted.